A Fork in the Road or a New Paradigm: The Uncertain Future of Trade Shows 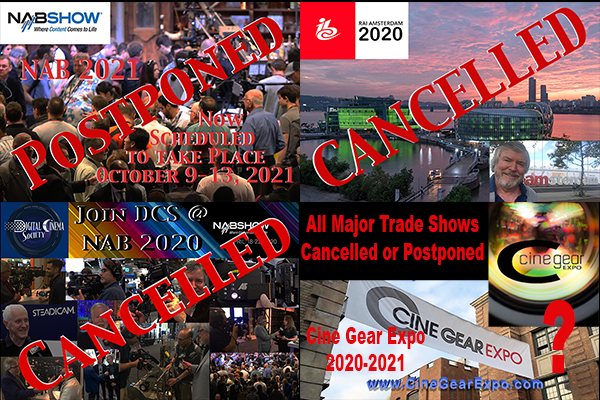 As the picture above suggests, it is a chaotic time for our industry. As you surely know if you follow DCS, all the major trade shows we regularly cover were either cancelled or postponed.  This has created major disruptions to product release cycles for professional cinema gear which are timed to make a big splash at the trade show events.

The latest news is that the granddaddy of industry trade shows, NAB, is moving from its traditional spot in mid-April to October 2021.  According to the National Association of Broadcasters (NAB) president and CEO Gordon Smith: “The pandemic remains a significant threat and the evidence suggests it will be well into next year before it could be under control in the U.S. We also have our own concerns around being able to deliver the type of event in April that will not only drive results, but one that can be produced safely for all involved and without significant limitations on the experience.”

Mid-October, just one month after IBC, and fairly close to Cine Gear Expo, Camerimage, SMPTE, IBEE, etc., means that something has to give, and the industry is scrambling to adjust. Will some of these great industry get-togethers fall by the wayside or merge like Variety and the Hollywood Reporter? Only time will tell.

In the meantime, exhibitors are economizing and saving huge sums by not participating.  Between booth rental, set-up, transportation, labor, and lodging to bring in their personnel, not to mention any entertainment they want to provide to clients, the tab for an international manufacturer can easily run between four and five million dollars.  Will this break give them a chance to reassess those expenditures?  Again, only time will tell.

Marketing teams have quickly pivoted and most of these events are now represented online, but of course, it is just not the same.  There’s no opportunity to get hands-on time with the products, or catch up with old friends and colleagues, no social gatherings at the end of the day, (but at least we don’t have to fret about which after hours events to attend.)  I’ve had a number of friends in the manufacturing sector who would normally be bitterly complaining about having to attend another trade show now lamenting how much they miss the experience.  Funny how a pandemic can help you appreciate what you used to take for granted.

For the foreseeable future, we can expect a lot more online activities, but to be honest, I’m getting pretty tired of webinars.  DCS will continue to do its part to keep you current on motion picture technology, and hopefully do it in a way that will not only inform, but also entertain.  As we all move forward, I would like to make a few suggestions to avoid some words and phrases that are definitely overused and are starting to get under my increasingly thin skin:

-Stop putting the word “virtual” in front of every event now forced to go online.

-Stop calling every new set of circumstances “the new normal”.

-Stop referring to online discussions as the “Twitterverse”.

See you on the other side.  Until then, stay safe, healthy, and prosperous.