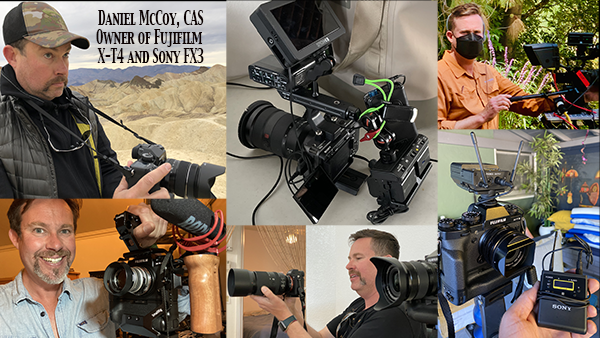 Daniel McCoy, CAS works on a lot of major Reality and Documentary programs as a Production Sound Mixer and is the owner of ToneMesa, which he refers to as a “boutique production support service”.  He originally started to invest in camera gear to service his own filmmaking projects.  However, after Daniel worked on five shows in a row that were shot with the increasingly popular Sony Venice, he decided to invest in Sony cameras.  He tried the A7c, Sony’s most compact full frame camera, but when the FX3, (which he calls the “cinevised version” of the A7siii,) was announced, he placed an order for two sight unseen.  Now he has a camera that is an easier sell as an additional camera for shows shooting with Sony, plus it features a 10.2 megapixel full-frame sensor with 15+ stops of dynamic range.  It not only shares the same mount as other Sony models, but also uses the same color science as their higher end digital cinema cameras like the FX6, FX9 and Venice.  It also has Real Time Touch Tracking AF and 5-axis in-body image stabilization, all in a body that weighs only about one and half pounds.  As a Sound Mixer, Daniel was especially impressed that the FX3 included a detachable adapter/top handle with two full size XLR audio inputs and a microphone holder.  In fact, McCoy has been so impressed with Sony that he has now ordered the new Sony flagship Venice 2.