In advance of Cine Gear Expo Zeiss has introduced a new family of high-speed lenses for Large Format Cinema production.  Known as the ZEISS Supreme Primes, the family consists of 13 lenses with fixed focal lengths between 15 and 200 millimeters. The majority of these lenses provide an extremely fast aperture of T1.5.   ZEISS Supreme Primes are designed to cover cinematic large format camera sensors and are compatible with all of the latest camera models, including the Sony Venice, ARRI Alexa LF, and RED Monstro. They provide a unique visual look due to their gentle sharpness, an aesthetic focus fall-off and rich bokeh. 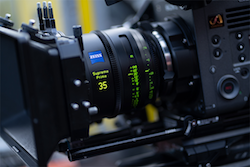 The ZEISS Supreme Primes, weighing only an average of 3.5 pounds, are significantly lighter than comparable lenses on the market and are quite compact.  The lenses are equipped with the ZEISS eXtended Data metadata technology. This data provides frame by frame information on lens vignetting and distortion in addition to the standard lens metadata provided using Cooke’s /i technology protocol. This feature can significantly speed up the entire film production’s workflow especially when using visual effects.  The lens properties can be removed so that computer generated effects imagery can be accurately applied to the captured imagery, then reapplied for continuity of image character and quality.  Previously, all of the data had to be measured manually in order to be corrected in post-production.