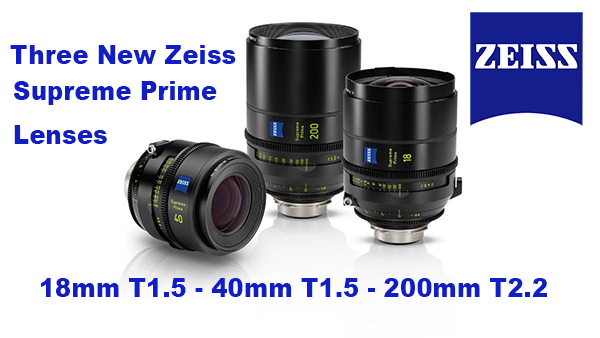 Three new high-speed, full-frame prime lenses – an 18mm T1.5, 40mm T1.5, and 200mm T2.2 – have been added to the ZEISS Supreme Prime series of cine lenses in response to customer feedback asking to close the gap between certain focal lengths.  The ZEISS Supreme Prime series now consists of 14 prime lenses with fixed focal lengths between 15mm and 200mm and maximum apertures from T1.5 to T2.2.  Eleven of the 14 lenses have a fast T-stop of T1.5.

The new lenses are equipped with the ZEISS eXtended Data metadata technology launched in 2017, meaning they provide frame-by-frame data on lens vignetting and distortion in addition to the standard metadata provided by Cooke’s /i technology1 protocol. This streamlines workflows, particularly for VFX and virtual production.

Although compact and light weight, ZEISS Supreme Primes are designed to cover large-format camera sensors and are compatible with the latest camera models, such as the Sony Venice, ARRI Alexa (Mini) LF, and RED Monstro and are equipped with an interchangeable mount system, which enables a quick change from PL to LPL.  Since their launch, the lenses have been used in a variety of high-budget commercials and music videos, as well as in feature films and TV series.  Recent productions include:

You can find more movies and series on the “Shot on ZEISS Supreme Prime” playlist on YouTube and IMDb.