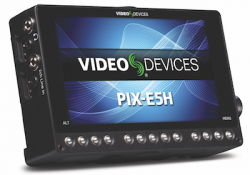 DCS supporter, Video Devices has announced their new PIX-E5H in now shipping. It represents the latest in the PIX-E series of 4K recording monitors and offers HDMI-only inputs/outputs for customers that do not need SDI capabilities. In conjunction, Video Devices also announces the release of Firmware Version 1.04 for the PIX-E5 and PIX-E5H.

With v1.04, both the PIX-E5 and PIX-E5H support HDMI recording triggers for Sony and Canon cameras. The update also adds the 500GB Samsung 850 EVO mSATA solid-state drive to the approved media list, for use in the removable USB-based SpeedDrive™. In addition to other enhancements, firmware v1.04 increases the previous HDMI audio inputs and outputs to four and eight channels, respectively.

The PIX-E5 series come packed with a full suite of precision monitoring tools and the ability to record 4K edit-ready files to the affordable SpeedDrive including a range of Apple ProRes codecs from Proxy to the highest quality Apple® ProRes 4444 XQ.