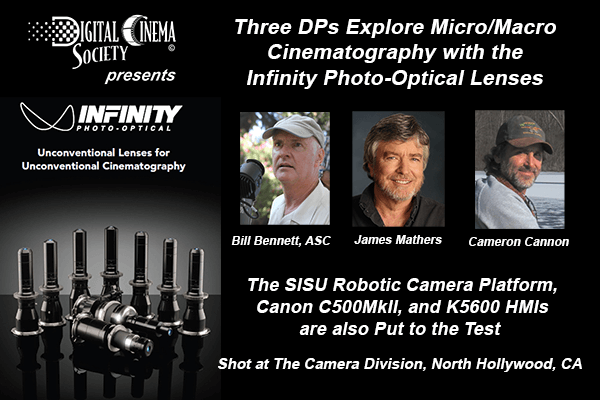 The Digital Cinema Society presents an exploration of Micro/Macro cinematography with three DPs including Bill Bennett, ASC, James Mathers, and Cameron Cannon.  The trio photograph a variety of shots in order to evaluate the technology which includes not only the lenses, but also the SiSu Robotic Camera Arm, the Canon C500 MkII, and HMIs lighting, which was provided by K5600.  The cinematographers share their insights in behind-the-scenes coverage from the tests that were shot at The Camera Division in North Hollywood, CA.  https://vimeo.com/637625836

Rufus Burnham and the team at The Camera Division

Mark McManus and the team at Infinity Photo-Optical

Canon USA for use of the Canon C500 Mk II

K5600 for use of Joker and Alpha HMIs

Behind-the-scenes coverage was shot with a Panasonic Lumix S5.

And a very special thanks to the many Infinity lens users whose images were featured.