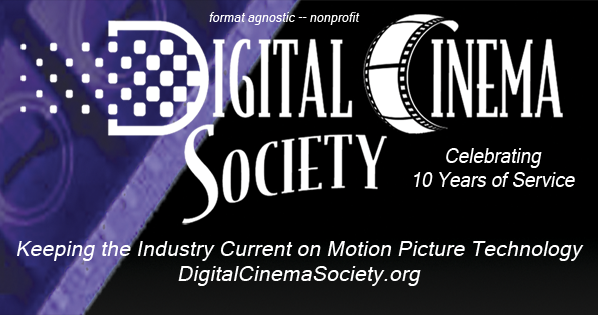 The Digital Cinema Society remains dedicated to informing the entertainment industry regarding the integration of new technology. As we get ready to celebrate our 10th Anniversary this year at NAB, perhaps it is time to reflect on where we started, where we are now, and identify our goals for the future.  It’s been an evolutionary decade for the way motion pictures are captured, posted, and exhibited, most notably via a transition from celluloid toward the use of digital technology.  We have never celebrated or sought to accelerate this process, but we have made it our business to try to objectively track it.  Our recently completed Member Survey gives us a snapshot of the group, which is now approaching an international membership of 6,000, to determine how they are viewing current trends, and adapting to these changes.  Before we see where we’re at now, or ponder the future, let’s look back at where we started.  I could write a book, and some have suggested I should, but let me just offer some highlights of the last decade in the history of Entertainment Industry technology and the role DCS has played.

In a time before Facebook, iPhones, HDSLR or RED cameras, our group was formed in 2003, not long after the inception of digital motion picture production. It was an outgrowth of a documentary entitled Digital Cinema Solutions, which featured interviews and clips from Filmmakers who were testing the digital waters at that time, as well as Tech experts from Production, Post, Exhibition and Distribution.  Filmmakers included industry luminaries such as James Cameron, George Lucas, Stephen Soderbergh, Robert Rodriguez, and Allen Daviau, ASC.   At the turn of the 21st Century, George Lucas, with the cooperation of Sony and Panavision, had adapted a handheld ENG style HD television camera to shoot another installment of his “Star Wars” franchise, at that point, the most successful in the history of motion pictures.  Lucas then introduced Robert Rodriguez to the technology, which he used on his own franchise, “Spy Kids.”  Meanwhile James Cameron had shot “Titanic” on 35mm film, but was using the same type of HD camera as his colleagues to shoot his documentaries such as “Ghost of the Abyss,” even going so far as to then blow them up to IMAX film format for exhibition. 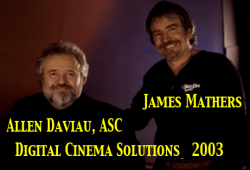 Exhibition was still almost entirely on film and the Digital Cinema Initiative, or “DCI,” was busy drafting standards for the widespread implementation of Digital Cinema.  Stephen Soderbergh was experimenting using a standard definition Canon DV camera intercut with 35mm for his feature, “Full Frontal.”  Notable ASC DPs were also starting to try DV; John Baily, ASC shot the feature “Celebration” and our own Allen Daviau, ASC shot the beautiful short, “Sweet,” which we featured in our DCS documentary.  He demonstrated that quality results were possible even with a Prosumer video camera if the proper care and filmmaking sensibilities were applied to the project.

Our documentary also covered the very active Indie sector where these new methods were enabling an explosion of production.  Although it was a rather small piece of the pie in the budget of a major motion picture where there may be several million dollar paydays for the stars, the ability to avoid a large upfront investment in motion picture film stock, processing, and printing was very appealing to the Indie Producer.  Of course, the tens of thousands of dollars they saved would be eclipsed by the cost to make film distribution prints, if they ever got a theatrical release, but most Indie Filmmakers were satisfied to cross that bridge when they fell off of it.  There was noble discussion of the democratization of movie making, but the truth is that the powers that be still controlled any significant means of distribution.  So, although a lot of Indie projects were getting made, (and not always at the best quality levels,) not too many were getting widely seen; so much for democracy. 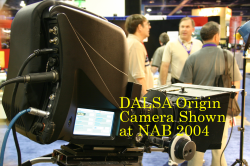 Although it wouldn’t be commercially available for several years, and never really gained industry acceptance, a Canadian company called DALSA showed a prototype for a 35mm single sensor camera, the Origin, capable of shooting in a 4K uncompressed RAW format.  It was sadly ahead of its time, and the ergonomics were never properly worked out before the plug got pulled on the project, but it was truly revolutionary.  I very clearly remember the DALSA NAB launch party with a standing room only crowd of every notable technology and business leader in the burgeoning Digital Cinematography field.  If some kind of disaster would have taken out the entire crowd, we would all still be shooting film today. 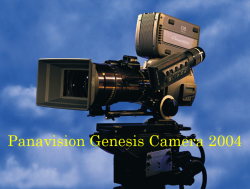 Meanwhile Panavision was working on a high-end HD camera in an almost identical form factor of their Panaflex film camera.  To be called the Genesis, with Sony electronics hidden beneath its film camera facade, it had a removable HDcam SR tape recording system built into a casing that looked like a film magazine.  Their rationale was to create a unit that would physically fit into film camera architecture and support, but looking practically identical to a film camera, it also had the benefit of adding a certain comfort factor for the film professionals who were starting to contemplate shooting digitally.  Within a few years it would become extremely popular and even help score a Best Picture Oscar Nomination for “Apocalypto,” as well as a Best Achievement in Cinematography nomination from the American Society of Cinematographers for DP, Dean Semler, ASC.

Although most theatrical productions continued to shoot on film, a few professionals started to realize some of the potential advantages of shooting digital, and there were some notable pictures for digital to  brag about, such as when in the same year two digitally acquired productions were up for Best Picture and Best Cinematography Oscars, “Slumdog Millionaire” and “The Curious Case of Benjamin Button,” with “Slumdog” taking both prizes.  This whole transition was then greatly accelerated with the adoption of large single sensor cameras where Cinematographers could use the 35mm format lenses they were accustomed to.  Some of these cameras also shot in a RAW format that more closely resembled a film workflow, (not baking-in the look on the set and having enough latitude to do the color correction in post.) 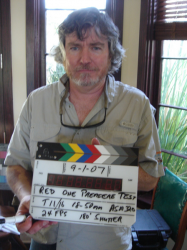 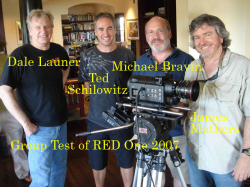 The influence of the RED Digital Cinema camera was undeniable in speeding the transition.  They came out with a camera that was inexpensive enough that burgeoning Filmmakers could afford to own their own camera, (even if they couldn’t always afford a very complete package of lenses and support gear.)  At the same time, they wooed major Filmmakers to try their tools, including Peter Jackson, Steven Soderbergh, David Fincher, Ridley Scott, and Baz Luhrman. 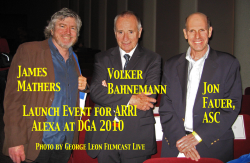 Meanwhile, ARRI was making major headway in developing Digital Cameras; their D21, although still needing some ergonomic and workflow refinements, was creating beautiful results.  Their Alexa came out a tad later, and their stellar reputation with filmmaking professionals built up over many decades of making extremely dependable film cameras helped them to quickly pick up a loyal following.  Filmmakers including Martin Scorsese, and the highly respected Cinematographer, Roger Deakins, ASC were among the many, and in fact it was a real turning point when, after experiencing the Alexa, Deakins said in a trade magazine article that “I am seriously beginning to doubt that I will shoot film again.”

Another turning point came when there was a threatened Actors strike, and seemingly overnight, almost all television drama started acquiring digitally.  TV pilot Producers opted to shoot digital, which allowed them to sign with AFTRA, who had already settled on a contract, instead of SAG who were still trying to negotiate, thus avoiding the threat of their actors walking out on strike.  The two unions later merged nulling this tactic, but the die was cast, and there was no turning back from the digital transition.  The continuing improvement of Digital Cinema cameras and the blurring of the lines between television and theatrical production also caused more high-end features to acquire digitally.

And then there was 3D, which had a strong resurgence helped along by James Cameron’s incredibly successful “Avatar.”  The production of a 3D motion picture is much more viable to shoot digitally, not just because most systems require two cameras, which would double the film stock consumption, but mostly because the ability to preview the 3D effect with high resolution monitoring saves time and costly errors.  Acquiring via digital also puts the project in the electronic realm from the get-go, making post production digital manipulation that much easier.

The transition to Digital Exhibition was also aided by 3D; movie attendance had been declining and Exhibitors were concerned that theaters needed to have the ability to give consumers something extra that they couldn’t easily get in their living rooms.  3D also gave Theater Owners a rationale to charge a premium, but the Studios were not about to release 3D on film.  They were already eager to get away from the expense of producing and shipping film prints.  However, Theater Owners still needed prodding to scrap their trusty film projectors for more expensive digital units that were also more prone to obsolescence, yet it was the Distributors who traditionally paid for the prints.  So there wasn’t much incentive for Exhibitors to make the leap, except that if they wanted to milk the 3D cash cow, they would have to convert to digital projection, and this was a strong nudge in that direction.  A financial device known as a “Virtual Print Fee” was also created so the studios would pay their share of the upgrade costs by contributing the money they would have spent on making prints toward financing the new equipment. 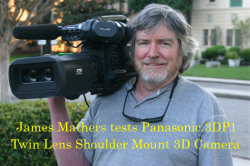 Today, the Digital Cinema Rollout is almost compete with the vast majority of theaters equipped with either 2K or 4K digital projection, many of them 3D capable.  Television drama is now almost completely shot digitally, and digital acquisition has also made significant inroads into the last bastion of film dominance, theatrical motion pictures.  Out of the last five Oscar Winners for Best Cinematography, only one was shot on film.  Kodak is in bankruptcy and Fujifilm has stopped producing stock while ARRI and Panavision have manufactured their last film cameras.  The writing seems to be on the wall, yet celluloid is arguably still the gold standard for quality and its archival capabilities cannot currently be matched.

It has been suggested that the Digital Cinema Society has served its purpose and should be put to bed; and to be honest, that sometimes sounds pretty tempting.  Although I enjoy my involvement, my main focus remains my work as a Filmmaker and Cinematographer, and this hobby we call DCS can get pretty consuming.  However, I feel there is still a strong need to help the Entertainment Industry keep current on technology, and I don’t see too many others answering the call. 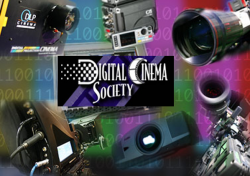 While it has been an interesting decade for motion picture technology, it will continue to evolve, and change is inevitable.  Advanced resolutions and glasses free 3D viewing are already at our doorstep, “Light Field” technology will soon allow focus and 3D depth cues, (from a single camera) to be set in post.  Holographic technology holds great promise for more cost effect and reliable storage, as well as interesting possibilities for multi-dimentional projection.  There are surely new technologies already out there that we have never heard of and many more that have yet to be imagined.  The evolution of digital technology is just beginning, and DCS will continue to cover it.  Here’s to the next decade, because as Charles Darwin said: “It is not the strongest of the species that survive, nor the most intelligent, but the most responsive to change.”

For pictorial history of the first decade of DCS visit out Vimeo page.