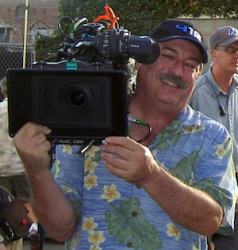 DCS is sad to report that longtime member and frequent volunteer, Douglas Knapp died Monday at his home in Burbank, CA at the age of 70 after a long battle with pancreatic cancer.  Doug had a long and very successful career as a camera operator and cinematographer with numerous television series and feature credits including Murphy Brown, and two Star Trek series, as well as features Beetlejuice, Escape From New York, and Driving Miss Daisy to name but a few.  Doug was born in Tulsa, Oklahoma but was raised in Calgary and graduated from the USC School of Cinematic Arts in 1972.  In addition to Doug’s involvement in the Digital Cinema Society, he was a longtime board member of the International Cinematographers Guild Local 600, and served terms on the board of the Visual Effects Society and SOC.  He also taught cinematography at the Los Angeles Film School and West Los Angeles College.  Doug is survived by his daughter, Allyson Cook, his longtime partner, Rebecca Forstadt, and his brother, Michael Knapp.