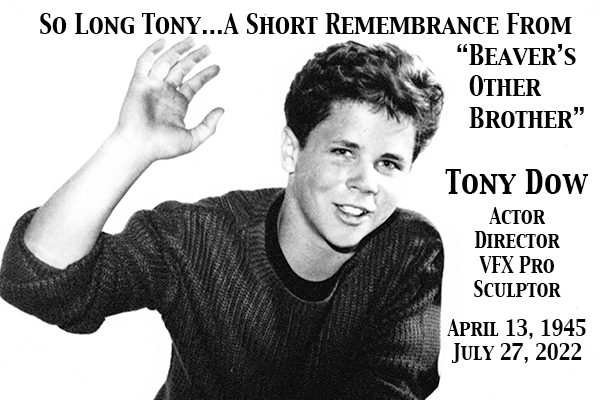 I often have the sad task of reporting the passing of longtime and prominent Digital Cinema Society members, both of which apply to Tony Dow who we lost this week after a long battle with cancer.  However, this one is more personal as Tony was a part of my life since literally before I can remember.  Tony starred along with my older brother Jerry Mathers, Hugh Beaumont, and Barbara Billingsley in the TV series “Leave It To Beaver” that went on the air in 1957 when I was only two years old.  The first major vacation I can remember taking was a personal appearance tour of Hawaii where the families were invited to tag along. Tony was always kind to this pesky little brother, much like his character on the series.  Since folks sometimes referred to me as “Beaver’s Brother,” I started referring to Tony as Beaver’s Other Brother, he was definitely family.

Although Tony is best known as Wally Cleaver, he went on to work as an actor with parts on shows such as “My Three Sons,” “Dr. Kildare,” and “Lassie” before taking on a recurring role on “Mr. Novak”, and into adulthood on projects such as “Knight Rider,” “Square Pegs” and “Murder, She Wrote.”  He later reprised the role of an adult Wally on a cable sitcom sequel, “The New Leave It To Beaver,” for several years in the early 1980’s on which he also had the chance to direct. This led to a distinguished career behind the lens as a TV Director on shows such as “Harry And The Hendersons,” “Coach,” “Star Trek: Deep Space Nine,” and “Babylon 5”, which also led to work as a VFX Supervisor.  As if all that wasn’t enough, Tony also became a noted Sculptor, whose work was once displayed at the Louvre.

It was my great pleasure to work on a few behind-the-lens projects with Tony over the years, including gathering the surviving cast to co-produce a “Leave It To Beaver” documentary in 2002.  Here’s a fun little trailer for the project which was eventually rolled into bonus material when the complete series was released on DVD:  https://vimeo.com/239375786/609da3ecbe

Tony is survived by his wife Lauren, son Christopher, and among his extended family, his nephew, DCS member Andrew Shulkind, the SVP Capture & Innovation at MSG Sphere Studios.  In addition to his many career accomplishments, Tony Dow was a genuinely nice human being, who will be greatly missed, not only by his family, but also his many friends and countless fans; I humbly count myself as all three.