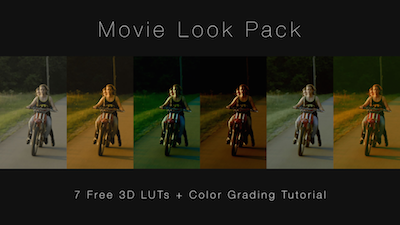 SmallHD announced that it is giving away a free set of color grades that recreate the unique look of seven different iconic films. The company is also publishing free video tutorials explaining how to get the most out of these looks during both production and post.  Designed to help teach filmmakers who are not yet versed in the use of color grades, the tutorial video outlines the capabilities and advantages of applying LUTs or looks to footage during actual shoots. The tutorial is tailored for developing new looks on the popular free DaVinci Resolve color grading software.

Provided in a small downloadable .zip file, the color grades come in the form of 3D LUT files originally designed in DaVinci Resolve. Visually iconic films such as Apocalypse Now, Saving Private Ryan, The Matrix and Moonrise Kingdom are among the seven free color grades.

Filmmakers have long known that recording flat or LOG video, with its low contrast image, offers great advantages to the postproduction process by preserving as much data as possible. However, viewing this flat video can make it tricky to gauge color and exposure, and can make critical focus difficult. Further, looking at raw images can also be disconcerting for an on-site client, where the filmmakers have to constantly explain what the imagery “will look like in post.”

The solution is applying 3D LUTs to the video shown in the on-set monitor, without altering the footage recorded from the camera itself. 3D LUTs are pre-defined profiles applied to the monitoring of a camera to give a representation of a corrected image or an image with a specific gamma curve. Creating a custom LUT is a step further. It can be an on-set tool providing a representation of the final desired image.

SmallHD offers seven different 3D LUTs, each emulating the look of a popular motion picture. As a starting point, a shooter or DIT readying for a specific location can apply one of these looks to test footage from the location using the DaVinci color grading software. That look can then be modified so the test footage has just the look desired when it is out of postproduction.

Displaying the on-set video with the look applied is made simple with SmallHD’s newest firmware upgrade to its 500 Series five-inch Full HD monitors. The firmware upgrade enables the monitor’s output to carry the LUT information to other monitors on-set. This feature will be resident in future monitors developed by SmallHD.