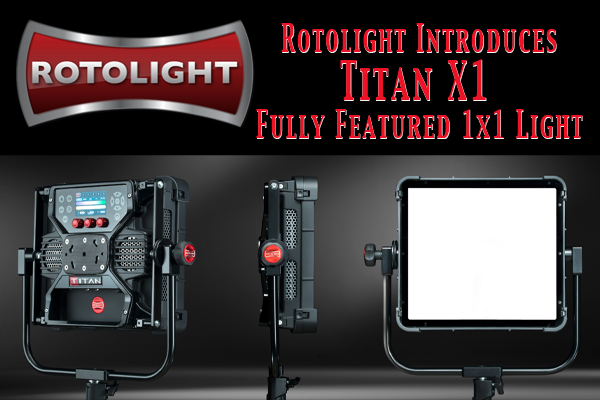 Rotolight has announced the Titan™ X1, an LED that brings new control and sophistication to the 1×1 for both studio and location lighting.  Titan™ X1 features the world’s first electronic diffusion technology, SmartSoft™, which controls diffusion, focus and spread without the need for gels.  In addition to SmartSoft™, the X1 has a full-color touchscreen display, High Speed Sync RGB flash, and wireless connectivity (Bluetooth/wDMX).

Titan™ X1 builds on the success of its sibling, the Titan™ X2, a versatile and powerful 1×2 light.  Both deliver superior color rendition via Rotolight’s specially engineered RGBWW Pentachromic Color Engine™ for precise skin tones and vivid color saturation, excelling in both CRI and TLCI performance across the entire CCT spectrum.  Designed and manufactured in the UK to uncompromising aerospace standards, and featuring over 41 patent protected technologies, the Titan™ X1 represents the very latest in LED technology in a sleek but rugged body. The Rotolight Titan™ X1 is available for pre-order now from Rotolight.com, B&H Photo and other leading retailers, and will begin shipping before the end of 2020.