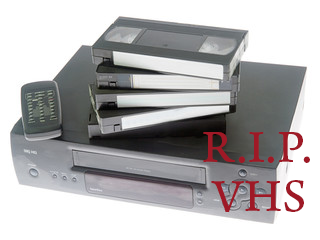 The last company to still makes VHS players will reportedly cease production of the technology at the end of this month. Despite the fact that far superior tapeless digital formats have taken hold, 750,000 of the players were sold worldwide last year. However, the Japanese firm, Funai has decided to call it quits after sourcing the components necessary to build the devices became too difficult to continue.

As the dominant home video format for several decades, there are surely still countless home movies stored on fragile and deteriorating VHS tapes. It is sad to think that many consumers without the foresight to migrate their content to tapeless formats will stand to lose their libraries. If you haven’t already done so, it’s time to digitize those VHS tapes.