Report on CES — Panasonic’s New Varicam, and 3D Steps Aside for 4K

There was lots to see at the International CES; too much really for our purposes, everything from car/infotainment, wearable biometrics, smartphone accessories, computers, and TVs, etc, etc., etc.    It was the largest CES ever with a record two million net square feet of exhibit space housing more than 3,200 exhibitors showing their wares to 150,000 attendees.   We make the effort to attend in order to track trends that may soon impact our members.  However, with so much to sift through, it was a challenge to find the Entertainment Technology we needed to focus on, but there are a few things worth reporting:

One exhibit I’m glad I didn’t miss was Panasonic’s.  Although still under glass, they were showing a prototype of their new Varicam which will be a large single sensor 4K Digital Cinema camcorder.  We all knew it was coming, but perhaps they’ve been taking their time to get it right, so we’re very much looking forward to seeing it in action by NAB.

A trend worth noting in the Television space is the amazing shift away from 3DTV, with most of that energy now being used to push 4K UHD. 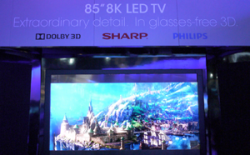 One 3D exhibition of note had three companies, including DCS supporter Dolby, combining their technology to present an impressive 85” 8K glasses-free display. Another interesting 3D exhibit that did require glasses was from LG, who built a very immersive exhibit made of 140 55” 4K 3D TVs stacked to make a curved 3D video wall that must have been some 80 feet wide and about 40 feet high.  Even in the bright exhibit hall, the experience was amazing.  What is more amazing to me, however, is the rapid exile of 3DTV to make way for the promotion of 4K UHD.  Compared to the few years past, where all you seemed to hear about was 3D, this year it was just a whisper, and the roar is now all about 4K.  It is ironic to me that one of the big benefits of 4K is the ability to provide a better 3D viewing experience by taking advantage of improved detail, yet the promotion of these two technologies has never seemed to be simultaneous.  It is also ironic that one of the major reasons given for the decline of 3DTV is the viewer’s reluctance to where glasses, even though that hurdle has now been largely overcome.

There were also several other examples of large 8K displays, but I honestly couldn’t see too much difference over the 4K.  Perhaps it is summed up by the words of a fellow attendee, who could be heard raving about the picture quality of a large screen TV as he pushed his way through the crowd to get a better view.  However, once he was up front and could read the sign with the TV’s specs, he dejectedly walked away muttering, “it’s only 4K.”