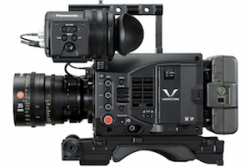 At premiere gala at the DGA in Hollywood on the evening of February 10th, Panasonic unveiled the latest edition to their VariCam line of Digital Cinema cameras. The new LT is a smaller, lighter and lower-priced version of the VariCam 35. It features the same impressive Super35 4K sensor with dual native ISOs of 800 and 5000. Weighing just under 6lbs, it should be ideal for SteadiCam, hand-held, or even drones. Of course, having the same sensor, it will cut seamlessly with it’s big brother, the VariCam 35, and may find a place as a secondary camera on multi-camera shoots or a more affordable single camera for the independent Owner/Operator. 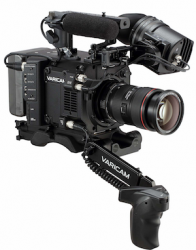 A notable difference is that the new camera comes standard with an EF mount, and in fact, if you want a PL, the more traditional choice for cinema, there is an additional charge for an optional adapter. However, the adapter is inexpensive, and the user serviceable change over looked quick and painless. Being able to easily handle both of the two most popular lens mounts in the world could be a valuable feature. Note that last year Canon announced they had sold over One Hundred Million EF lenses which makes it easy to understand why Panasonic would not want to ignore this popular mount. 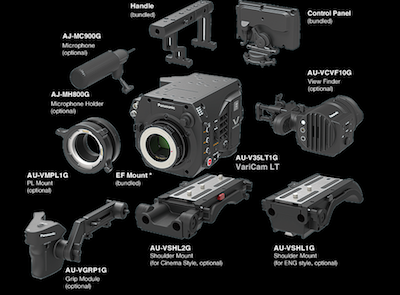 The original VariCam 35 was already somewhat component, with a detachable recorder that could also be used with the smaller sensor VariCam HS, and the new model continues that tradition. Everything is detachable and variously configurable, (see exploded view.) Another difference is that the new trimmed down model has one Express P2 slot instead of two. It also has an SD slot for recording simultaneous HD proxies which can be wirelessly uploaded to an FTP for fast turnaround workflows or wireless LUT creation.

The LT records 4K 10-bit at 24fps AVC-Intra, 320megabits per second, at a ten to one compression ratio. Optionally, it can record various frame rates in 4K up to 60fps with higher compression and lower bit rates, and up to 240FPS in HD. External RAW recording was announced as a future upgrade, and several outboard recording manufacturers have already confirmed they will support this format as soon as Panasonic makes it available.

The VariCam LT, officially designated as the AU-V35LT1G, will be available at the end of March with an MSRP of $18,000 for the body only, and $24,000 including the viewfinder.

For more information about the VariCam LT visit:  http://pro-av.panasonic.net/en/varicam/lt/index.html