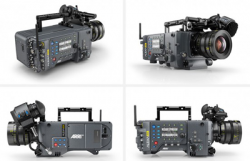 ARRI waited until they were on their home turf at the Cinec expo in Munich to announce a new VERY large sensor camera, known as the ALEXA 65. The sensor is around 3x bigger than that of a Super35 with an active image area of 54.12 mm x 25.59mm which is even larger than the film gate of ARRI’s 765 65mm film camera.  The A3X sensor boasts 6560 x 3102 photosites, with dynamic range of more than 14 stops. The sensor design, similar to the ALEXA XT, shares colorimetry and dynamic range characteristics to match well with earlier Alexa models.

ARRI has rehoused Hasselblad lenses to cover the much larger image circle including a 50-110mm zoom and primes that range from 24mm to 300mm.

According to Marc Shipman-Mueler, ARRI, Product Manager for Camera Systems, the new camera will not be for sale and only available for rental through ARRI Rental.

Codex has also announced support for the new format, and the camera already incorporates a Codex recording engine, similar to the system that is built into the ALEXA XT. Existing ALEXA XR Capture Drives support recording from ALEXA 65 at up to 24fps, and a 512GB media card will record around ten minutes in full open gate mode. Next-generation Capture Drives developed by Codex will offer 2TB of recording capacity, and be capable of 20Gb/s data rates, enabling recording times of over 45 minutes.