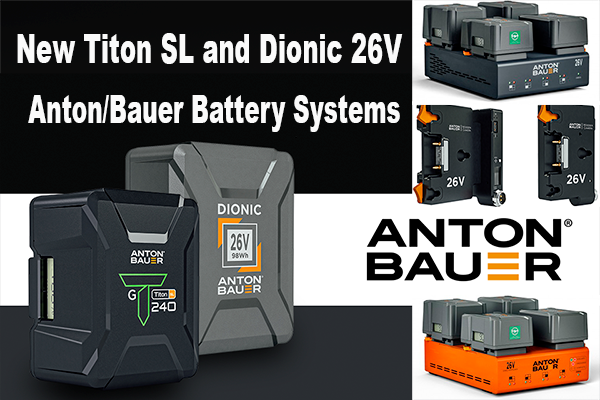 Anton/Bauer has announced two new battery systems, the Titon SL and Dionic 26V lithium-ions, along with chargers, dischargers, and a host of battery plates and adapters from sister company Wooden Camera. The Titon SL batteries are designed to primarily power Digital Cinema cameras supporting a continuous 10A draw and 12.5A for up to 5 seconds. The Titon SL batts are said to be smaller and lighter than previous Anton/Bauer series batteries, yet do not sacrifice performance.  They feature a large LCD info screen, a built-in D-tap power output, as well as a built-in USB power port. They are available in Gold Mount and V-mount. The Titon SL 150 model features a 143 Wh capacity and is 29% lighter and 52% smaller than the previous Digital 150 Wh batteries, while the Titon S 240 gives 238 Wh capacity, which is 26% more power, while being 25% smaller than the previous 190 Digital batteries.

Anton/Bauer has also come up with a solution to the many new higher drawing 26-Volt camera and LED lighting systems that have recently come to market.  The new Dionic 26V system includes a 98Wh and 240Wh battery.  In addition to the necessary new chargers and adapters, is a 26V plate manufactured in conjunction with Wooden Camera which enables you to mount a Dionic 26V battery to power your camera, while also drawing power from 24V block batteries connected to the plate’s 2-pin Fischer input. Two 15v D-Tap power outputs provide for legacy accessories, from the 24/26V source, and in the case of current overdraw by the accessories, the plate will automatically shut down the D-Tap outputs, without interrupting power to the camera. You can reset the power outputs digitally, using the plate’s OLED info screen. If you are looking for a hot-swap plate for your 26v batteries, the Anton/Bauer Gold Mount Plus Shark Fin plate, supports two Dionic Gold Mount Plus 26V batteries, and incorporates all the same features as the single-battery plate.  A new Dual Voltage 4-position charger can simultaneously charge both 26V and 14V Gold Mount and Gold Mount Plus batteries, taking approximately 1.5 hours to fully charge a Dionic 26V 98W battery.  Estimated run times for popular camera and lights below: