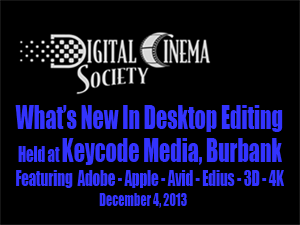 In this coverage from our December 4, 2013 event at Keycode Media in Burbank, we explore the areas of traditional off-line creative editing as well as finishing on the desktop, including dealing with new challenges such as 4K, 3D, and collaborative workflows.