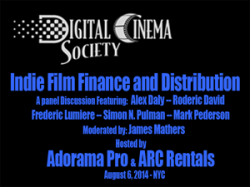 We depart from our usual new technology coverage and in this discussion of Indie Film Finance and Distribution we explore the business of Show Biz to demystify the many approaches to motion picture finance and the variety of ways Producers can try to earn a return on their investment.

The discussion is moderated by Cinematographer and DCS President James Mathers. Held August 6, 2014 at the New York City headquarters of our Host, Adorama and ARC Rentals.