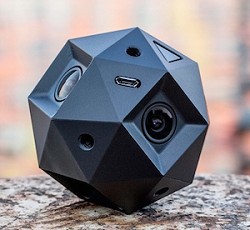 A recently launched on Kickstarter campaign seeks to fund the creation of a new VR camera that will capture high-quality 360-degree 4K video in a form factor only about the size of a tennis ball.  It will have six built-in 4K lenses to capture 360-degree video at 60fps.  To be known as Sphericam 2, the new camera will also have WiFi, allowing live streaming to desktop or mobile devices.

This is the second iteration of Sphericam, after a first successful Kickstarter campaign which shipped cameras in 2013.  The current campaign has already surpassed their initial goal of $150K with pledges ranging between $1,299, (which are all gone), and $2,499 for various versions, all the way up to $4,999 for the Titanium and $9,999 for the Gold version.  Estimated delivery for most versions is December 2015.   For more details visit: https://www.kickstarter.com/projects/1996234044/sphericam-2-the-4k-360o-video-camera-for-virtual-r