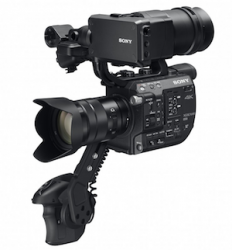 Sony has just announced the PXW-FS5, a new 4K Super 35mm CMOS sensor cinema camera that will fit in between the FS7 and the FS700. With an MSRP of $5,600US for the body only, and $6,100US with an 18-105mm f/4 lens, the camera will only be able to shoot UHD 3840 x 2160 out of the box.  However DCI 4K and 4K RAW will be available later via a paid firmware update. The LCD is detachable, and can be mounted in a number of places, while the on-board recording is via industry-standard SD cards. With a native ISO of 3200, strong ND filtration is very necessary, which is achieved with a built-in electronic variable ND filter that’s capable of 7 stops (ND 2.1). There will also be a manual ND filter with options of clear, 1/4, 1/16, and 1/64. The camera is expected to ship by the end of November 2015. 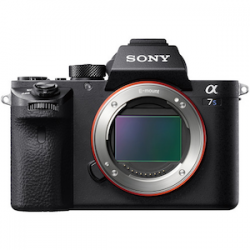 Also announce by Sony is their a7S II Mirrorless Digital Camera with a full-frame 12.2MP Exmor CMOS sensor.  It is capable of internal UHD 4K recording at 30 fps, but can also record 1080p at up to 120 fps, all in the XAVC S format. For both stills and video recording, the BIONZ X image processor pairs with the sensor to enable expanded sensitivity to ISO 409600, as well as fast intelligent autofocus with low-light sensitivity. Further enabling working in difficult lighting conditions, 5-axis SteadyShot INSIDE image stabilization compensates for vertical, horizontal, pitch, yaw, and roll camera movements for sharper, smoother handheld recording.

The a7S II also has the ability to utilize S-Log3 Gamma and S-Gamut3 in addition to S-Log2, for increasing dynamic range values. The body is magnesium alloy and features built-in Wi-Fi connectivity with NFC to pair with mobile devices to for wireless sharing and remote camera control. The a7S II also has multiple timecode recording options to meet different workflows; ’Record Run” or “Free Run” in both drop frame and non-drop frame modes. The camera will go on sale September 17, 2015 at an MSRP of just under $3,000US.