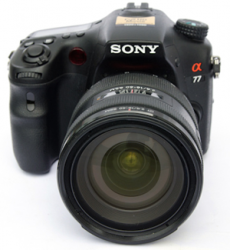 Sony is upgrading their high-end DSLR lineup with the Alpha a77II DSLR Camera. The new camera is available as a body only with a street price of about $1,200 and also packaged as a kit with a 16-50mm f/2.8 DT lens at about $1,800.  The 77II takes is a high-performance, fast-focusing A-mount APS-C DSLR with improved performance of its predecessor, owing to the BIONZ X image processor and wide-coverage phase detection autofocus system with 79 AF points, including 15 cross-type points.

Featuring a 24.3MP Exmor CMOS sensor, image quality and color reproduction on the 77II are said to be impressive even at high ISO sensitivities, which run from 100-25600 and are expandable to ISO 51200. The sensor design and optimized on-chip lens positioning increase the light-collecting capability of the sensor, particularly at the edges and corners of the frame. The BIONZ X processor enables faster overall performance and improved video capability less noise. The 77II also has built-in Wi-Fi connectivity with NFC for wireless image transfer and remote camera control via smart devices.

Translucent Mirror Technology and a new AF sensor have improved low-light focus accuracy with other improved autofocus features that include Eye AF, AF Range Control, 5-Step Tracking Adjustment, and Balance Priority setting. This allows full-resolution continuous shooting at 12 fps and for up to 60 frames in Fine quality JPEG.

Full HD 1080 at 60p and 24p is supported with new features that include 3-step AF Tracking on moving subjects, a zebra function, and controllable metered audio levels for both the built-in and external microphones. Program, Shutter Priority, Aperture Priority and Manual exposure control are supported and recording in both the AVCHD and MP4 codecs are possible. You also have the option of capturing uncompressed HD video to an optional external recorder for super high bit-rate via the clean HDMI output; (however, no 4K output).

Both an LCD monitor and the OLED Tru-Finder Electronic Viewfinder for live view and playback are included. The 3.0″ 1,229k-dot 3-way tiltable LCD screen enables clear image view with a rotating, tilting capability for shooting from any angle, including up and down tilt when shooting vertically.