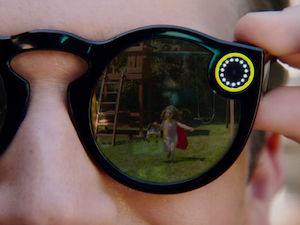 Communications app Snapchat, rebranded as Snap Inc. is getting into both the hardware and fashion business. Its first physical product will be a one-size-fits-all pair of sunglasses that can record up to 10 seconds of video from the wearer’s POV. The spectacles, available later this year, will run $129.99 and are reminiscent of Google Glass. Glass was the ill-fated attempt by Google in 2013 to get people to wear $1,500 computerized glasses that could surf the Web and record images.

The video on the glasses will capture video in a new circular format, with a 115-degree-angle lens designed to be viewed in a vertical format on smartphones in the Snapchat app. Video will also be saved to the device.

Snapchat has been the leading proponent of vertical video–smartphone clips produced by holding the phone in the vertical instead of the horizontal position, saying users feel more natural looking at their phones that way. Production companies that make videos shown on Snapchat’s Discover channel are told to produce them vertically.

While we’re on the subject of vertical video, DCS member Peter Keenan, a Producer of commercials, has pointed out the difficulties these new framing trends pose to filmmakers. Our traditional 16×9 framing is highly incompatible with vertical 9×16 and circular 1:1 aspect ratios. However, unless they want to shoot completely separate masters of all content that might also be used on social media, they are being asked to protect for all three formats.  It either makes for a heck of a lot of extra work or a heck of a lot of wasted space for the 16×9 frame, as illustrated in this graphic from Snapchat: