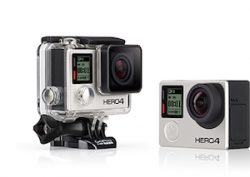 Available October 5th, the HERO4 comes in two versions, (although three new models were announced in total). The HERO4 Black shoots 4k up to 30fps, while the HERO4 Silver has lower specs but features the first built-in touchscreen in a GoPro. The third model is a budget camera, called “HERO,” at a new low price of $129. The HERO can record 1080p video at 30 frames per second or 720p video at 60fps, and is waterproof up to 40 meters.

In addition to 4k at 30fps, the HERO4 Black also captures 2.7k at 60fps, and 1080p video at 120fps. The HERO4 Silver can record 2.7k at 30fps, 1080p at 60fps, and 720p at 120fps. The Silver also features a new touchscreen interface, and the HERO4 Black features built-in Wi-Fi and Bluetooth®, allowing you to connect to the GoPro App, Smart Remote2 and more. The GoPro App transforms your phone or tablet into a live video remote for your camera, offering full control of all functions and settings, easy shot preview and playback, plus sharing via text, email, Facebook and more. The Smart Remote allows you to control multiple GoPro cameras from distances of up to 600’ (180m).