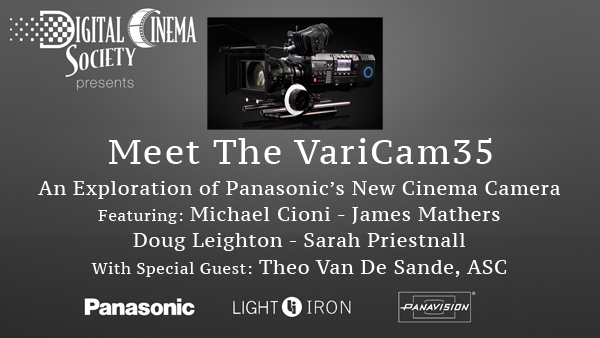 It took a long while for Panasonic to enter the 4K Digital Cinema Camera Club. In this event which took place November 5th at Panavision World Headquarters in L.A., our aim was to let the audience decide for themselves if it was worth the wait? With a comprehensive look at the new VariCam 35 we tried to show not just the the camera, it’s many features, and recording formats, but also examined the workflow.

The presentations are divided into nine segments which are recommended to be viewed in order.   You’ll see demo footage, and even the live output of the camera in various lighting set ups and ISO settings projected on a theatrical screen, which even in the streaming coverage, should allow viewers to draw their own conclusions.

Presenters include Cinematographer and DCS President James Mathers, Michael Cioni of Light Iron, Doug Leighton of Panasonic, Sarah Priestnall of Codex, and a special guest, Theo Van de Sande, ASC who recently shot a pilot for Amazon with the VariCam 35 and gave his initial impressions of the camera.

Special thanks to Panavision for serving as host of this ambitious event and to the staff of Light Iron for their tireless work in helping us produce it. We also want to thank MACCAM for providing Lighting, JL Fisher for the loan of a dolly, Canon and Fujinon who provided cameras and lensing to cover the event, OConnor and Chrosziel for camera support, as well as our volunteer shooting crew of David Mahlmann, SOC, and Scott MacDonald who operated cameras, as well as Christopher Knell who handled Sound.

Visit the New Streaming page to see this and other recent additions: www.digitalcinemasociety.org/new-streaming-videos