New DCS Streaming: The Economics and Aesthetics of Shooting Indie Features on Film 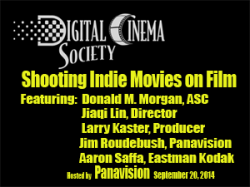 Visit the New Streaming page from the link on the DCS homepage to view our latest event coverage: The Economics and Aesthetics of Shooting Indie Features on Film.  There has been a sea change for feature film acquisition in the last decade moving from primarily celluloid to digital capture.  The transition away from film in Still Photography and the end of Theatrical Distribution on Film means the market for Film has shrunk.  Without economies of scale, the danger is that motion picture acquisition on celluloid could become more of a boutique business model with rising costs.   While established Directors, from Steven Spielberg to Christopher Nolan have the clout to insist on shooting film, Indie Filmmakers might fear this will be out of their reach.

In this event we explore the economics of acquiring Indie Films on celluloid and demonstrate how film may still be the right choice for many projects.  Although it is not included in the streaming coverage because it has yet to be distributed, we screened the short film, “The Red House” to serve as a case study and are joined by the creative team behind the project.

Our Panelists include Director, Jiaqi “Maggie” Lin, Producer Larry Kaster, Director of Photography, Donald M. Morgan, ASC, Sr. Marketing Director at Panavision, Jim Roudebush, and Aaron Saffa from Eastman Kodak.  (Although not present in person, we also read a message on the topic from Robert Yeoman, ASC).  The discussion is moderated by Cinematographer and DCS President, James Mathers.

Held September 20, 2014 at Panavision World Headquarters, Woodland Hills, CA.  Special thanks to the entire Panavision staff, especially Bob Harvey, Judy Doherty, Heather Mayer, and Projectionist Adam Hodge.  Our volunteer Camera Operators were Casey McBeath and Yongmin Hwang.  Blame James Mathers for all Post Production; (FYI, he was learning to use Adobe Premiere on this edit, which actually worked out very well, and made the job a lot easier).