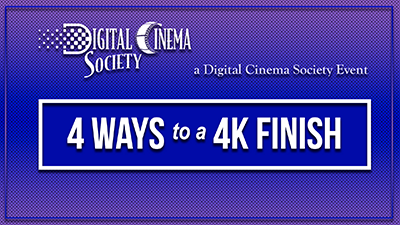 Delivery of a 4K Master is increasingly what is being demanded, but the good news is that it is getting easier to achieve, and there are now many routes to get there.  During this event, held Saturday, November 21st at Raleigh Studios in Hollywood, the Digital Cinema Society in cooperation with such groups as the LAPPG, Digital Production BuZZ, ProductionHUB, Aotg.com, Post Perspective, and Pro Video Coalition gathered to explore the challenges and solutions of finishing in 4K.

The coverage is accessible from the New Streaming link on the DCS page or visit: