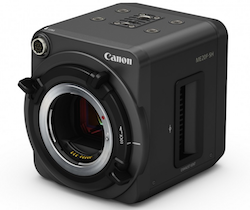 I have been under NDA, restricted from commenting, but now it is official and I’m excited to report about the new Canon ME20F-SH.  It delivers exceptionally high sensitivity for the capture of Full HD resolution with a minimum illumination of less than 0.0005 lux, equivalent to an ISO sensitivity of over 4,000,000.  I have personally witnessed this “See-In-The-Dark” camera and it is amazing!  It is much more than just a night vision look, creating pretty descent looking color images in less light than you can see with the naked eye.  It will certainly have cinematic production, reality television, and nature/wildlife documentary applications in addition to the obvious surveillance uses it was probably designed for. 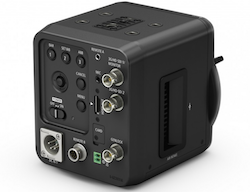 The perception of color is always reduced in extreme low-light conditions, but the previous alternative of using infrared illumination has only been able to produce black and white, while the ME20F-SH is capable of capturing quite a bit of color information at HD resolution.  The 35mm full-frame CMOS sensor has pixels measuring 19 microns square, which is more than 5.5 times the surface area of the pixels on other top-of-the-line CMOS sensor cameras.

The compact, modular ME20F-SH body weighs only 2.4lbs. which should allow for a variety of custom configurations, such as for aerial drone or deep underwater applications.  It does not have on-board recording, but supports various standard video-recording interfaces via 3G/HD-SDI and HDMI. The ME20F-SH comes equipped with the same EF mount as Canon’s SLR and Cinema EOS cameras, and is expected to be available this December at a suggested retail price of $30,000US.