Getting a jump on NAB announcements, Canon put out word today of two new 4K cameras: the Canon EOS C300 Mark II and the compact fixed-lens XC10. As the successor to the popular EOS C300, the C300 Mark II is said to have several major improvements possibly even surpassing their own C500. These include internal 4K and UHD recording to CFast cards, 4K RAW output, and an OLED electronic viewfinder. Such upgrades could help make the Mark II even more widely adopted than the original C300.

At the opposite end of the spectrum, the XC10 is a compact camcorder resembling the form factor of a DSLR.  It has a 1″ CMOS sensor, and fixed 10x zoom lens. The XC10 seems to be aimed at the prosumer market, but just might be versatile enough to handle a wide range of applications 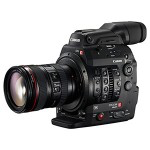 The EOS C300 Mark II will record 4K internally at either true DCI 4K (4096 x 2160) or Ultra HD (3840 x 2160) resolution. The 4K CMOS sensor is equivalent in size to Super 35mm, and is driven by dual DIGIC DV 5 image processors. The camera is available in Canon EF or PL mount versions, depending on your lens preference. The EF-mount is able to take advantage of Canon’s Dual Pixel CMOS AF technology, which supports a variety of autofocus modes, including continuous AF and Face Recognition when used with compatible Canon EF lenses. The camera also enjoys a boost in its ISO range, ranging from 160 to 25600 ISO (100 to 102400 ISO when sensitivity is expanded).

Rather than the dual Compact Flash card slots found on the original C300, the Mark II records to newer and faster CFast cards, which provide the speed required to handle high-bit-rate 4K recording.  In addition to these internal recording options is the ability to output 4K raw video, a feature previously found only on Canon’s C500 Cinema EOS camera.  The Canon EOS C300 Mark II Digital Cinema Camera is expected to be available in September 2015 for an estimated retail price of $20K, and will be available with either EF or PL mount. 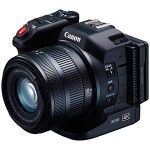 In addition to the 4K video, the camera can also take 12-megapixel photos (4:3) and features common still-camera exposure modes, including Auto, program AE, shutter priority, aperture priority, as well as manual exposure. The built-in 10x Canon zoom lens is optimized for 4K video and provides a 35mm equivalent focal range of 27.3 to 273mm in video mode (24.1 to 241mm in 4:3 photo mode). It has a maximum aperture of f/2.8 at the wide end ramping to f/5.6 at the telephoto end. The lens has built-in optical and digital image stabilization, and manual focus and zoom rings to allow use as with any DSLR lens.  The XC10 4K Digital Camcorder is scheduled to be available in June 2015 with an MSRP of $2,499 including a SanDisk 64GB CFast™ 2.0 card and card reader.