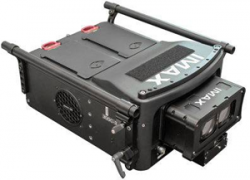 IMAX has announced that it has developed an integrated Dual 65mm sensor 4K 3D camera which has been used on Michael Bay’s upcoming, Transformers: Age of Extinction. They claim that this is “the first true 4K stereo camera, which captures both left and right eye images at full 4K resolution.” According to the company, the new IMAX 3D Digital Camera system is “smaller, lighter and easier to use than other 3D digital camera systems on the market.” Of course, it is a fraction of the size of any IMAX 3D Film camera.

Employing a “side-by-side” design, there is no beam splitter, so it can stay compact while maintaining IMAX’s 1.9:1 aspect ratio at 4K resolution to each eye. Lenses are swapped as a one piece stereo pair with no need to realign separate lenses as the focal length is changed.

Weighing less than half the weight of rivals, the camera also has a pre-record buffer allowing capture before the operator hits the record button, features especially valuable to IMAX Nature Filmmakers.

See a featurette of the new camera in a behind the scenes look at the new Transformers as well as the IMAX nature doc, Island of Lemurs: Madagascar: