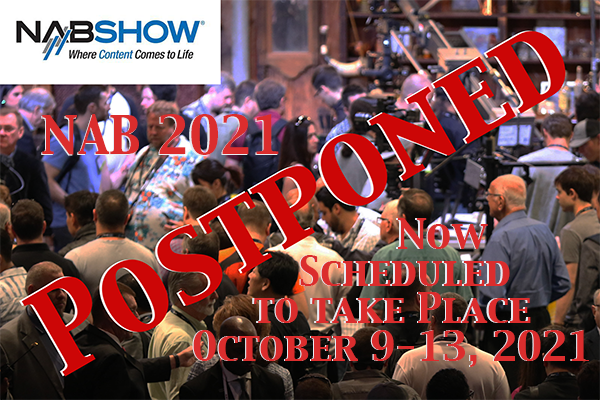 NAB 2021 has moved from its usual spring schedule, around the second week of April, to October 9-13, 2021 at the Las Vegas Convention Center.  The National Association of Broadcasters (NAB) president and CEO Gordon Smith issued a statement that said in part:

“We recognize the vital role NAB Show plays as a driver of innovation and an economic engine for the global media and entertainment industry. With that in mind, it is critical we act on your behalf and in a way that will best serve the long-term interests of the industry. We have worked diligently over the last few weeks and months monitoring a range of variables, including health and safety concerns, economic indicators, industry developments and travel restrictions, to gain an understanding of overall trends and future conditions for holding a major event in 2021. We have also reached out extensively to the show community to collect feedback.

Through all of this we have witnessed growing concern and uncertainty over what the next six months will bring; enough that there appears to be a good deal of reluctance around participating in large events in the first half of next year. The pandemic remains a significant threat and the evidence suggests it will be well into next year before it could be under control in the U.S. We also have our own concerns around being able to deliver the type of event in April that will not only drive results, but one that can be produced safely for all involved and without significant limitations on the experience.”

The move to October will result in NAB happening after IBC 2021, which is scheduled for 10-14 September 2021.  It will surely affect product release cycles as manufacturers continue to adapt to the changes necessitated by the pandemic.