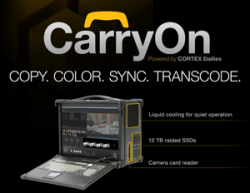 CORTEX CarryOn is an all-new, portable, all-in-one on-set dailies solution featuring compact, lightweight and rugged ergonomics at a lower price-point than anything in its class.  The system is capable of processing dailies at any resolution up to 6K from all popular digital cinema cameras (ARRI, Sony, Canon and RED).  The CarryOn is equipped with MTI’s CORTEX Dailies software featuring color and media tracking to bring coherence from set to post. 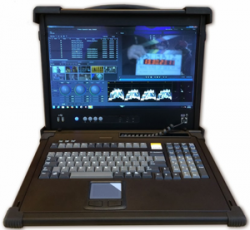 Tech specs include a liquid-cooled Intel i7 processor, 12TB SSD RAID, GPU-accelerated rendering and Thunderbolt.  See it demoed along with their other new technologies in our DCS streaming interview from the MTI Film booth at NAB.