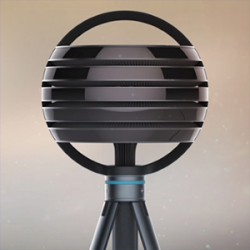 Lytro has announced details of a new kind of camera, the Lytro Immerge, designed specifically to capture footage for virtual-reality experiences. The camera is equipped with hundreds of tiny lenses and image sensors designed to capture the entire “light field”; not just the image in 360-degree, but the spacial qualities such as the direction the light is traveling. This is said to allow for the creation of an interactive VR environment with “live-action presence” where focus and dimensionality can change with the viewer’s moment….No simple task.

The camera’s optical technology captures five horizontal “layers” with an array of 360-degree cameras. This allows for 6 degrees of parallax adjustment, replicating the perspective shift that you see when moving your head. The content creator can determine what weight to assign the visual data to help direct a viewer’s attention in the desired direction. The Immerge can also be set to capture a 270 or 180 degree coverage area rather than the full 360 degrees. The recorder/server is as big as a small refrigerator and still only holds about one hour of footage.

Of course the real complexity of the technology comes in post where the enormous amount of data coming off the camera is molded to create the VR environment. Lytro has created custom editing software, plug-ins for existing workflows, and it even a playback app for such devices as Oculus Rift, Google Cardboard, and Microsoft HoloLens. The best experience requires a headset with positional tracking, and a specialized online streaming server run by Lytro, will be available on demand to deliver the content to the end user.

Price details are not currently available, but this gear is obviously aimed at the professional content creator and such cutting edge technology will likely not come cheap.