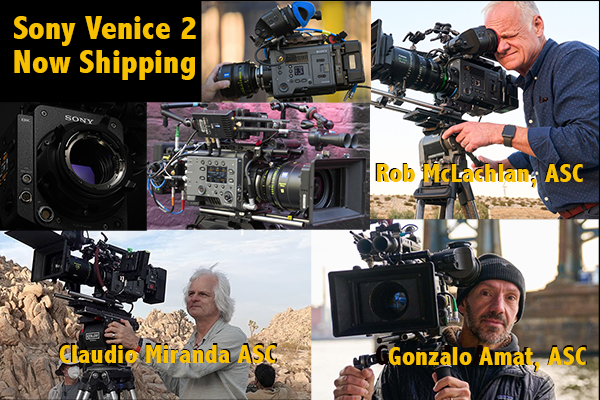 Sony has announced the first shipments of their flagship digital cinema camera, the VENICE 2.  Prior to the release, the VENICE 2 had already been used on feature films and episodic work with cinematographers Claudio Miranda, ASC, Gonzalo Amat, ASC, and Rob McLachlan, ASC, (pictured above).  It has now also been employed on high-profile commercials with cinematographers Newton Thomas Sigel, ASC, Tommy Maddox-Upshaw, ASC and Rachel Morrison, ASC, being among the first to use the camera.  Since its launch last year, the VENICE 2 has generated a lot of interest due to its 8.6K full-frame image sensor with the capability to capture images in formats from full-frame to Super35 and Anamorphic – all at the 4K+ resolution now required by many streamers and studios.

Gonzalo Amat, ASC, who will use VENICE 2 on the upcoming season of the Netflix series Outer Banks, was impressed by the ability to seamlessly move between 800 ASA and 3200. Claudio Miranda, ASC is now using the camera on a feature film and Rob McLachlan, ASC has been shooting the new LA ‘Color Noir’ mystery thriller series, American Gigolo with two VENICE 2 cameras for eight weeks now. McLachlan commented, “Every day, under every condition and setting, it continues to impress. Whether at night, at dawn, in the studio, on city nights, or at high noon and sunset in the desert, the highlights naturally roll-off, and our actors look gorgeous.” He added, “Nighttime cityscapes almost light themselves, and I’m using less light control than ever elsewhere. I knew this would be the case from my experience shooting the camera’s test film, but what is really wowing us is how incredibly clean and pleasing the images are at 3200 ISO. And we’ve tested it at 6400 and even 12,800 ISO, and it still looks really good.”

The VENICE 2 features a smaller, more lightweight body with the ability to capture X-OCN and 4K Apple ProRes 4444 and 422 HQ internally.  As a result of market feedback, Sony will also enable the following features in early 2023 when V2 is released:

Zoom to Fit for Anamorphic lens operation will also be enabled and a next-generation Extension System for VENICE 2 8K is planned to be released by early 2023.  VENICE 2 demos and behind-the-scenes coverage can be viewed here:  https://www.youtube.com/playlist?list=PLBMbWrCfXhaPIIMbvtjNx52y2TrT3iydK