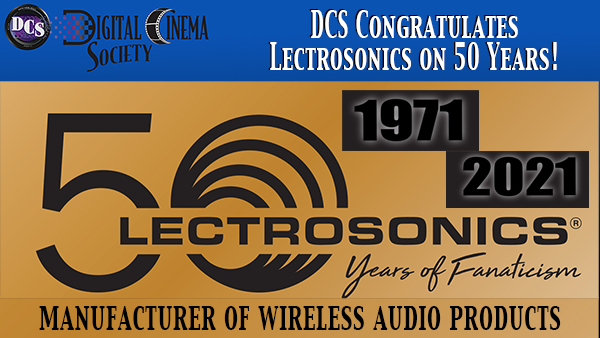 The Digital Cinema Society congratulates Lectrosonics, a leading manufacturer of wireless microphone systems and audio processing products, as it celebrates its 50th Anniversary.  Founded in March of 1971 in Albuquerque, New Mexico, producing portable PA systems, they soon added wireless microphones to their product line. By the 80s, Lectrosonics found success in the broadcast market with its plug-on transmitter and compact receiver for electronic news gathering and documentary production.  The wireless IFB (or interruptible foldback) system was introduced in the late 90s and became a workhorse product in broadcast and film production. In 2017, the company received the Academy Award for Technical Achievement for this technology due to the fact that it has been used in the majority of feature films for more than a decade. Today, all Lectrosonics products are still 100% made in their US factory in Rio Rancho, New Mexico, are essential tools for the broadcast and film production communities, and are regularly found throughout the music industry as well as live sound reinforcement for the pro touring, installed sound, theater and church markets.