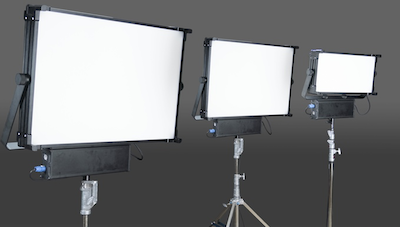 Ending this Sunday, May 8th, is an extremely successful Kickstarter campaign for a new LED lighting unit designed with built-in color meter and intelligent color management technology.  At the push of a button these new lights, known as SoftPanels are said to instantly read the current ambient color conditions, and then exactly color-balance their LED color output to match the scene’s ambient conditions.

The technology may be new, but the brains behind it are some of the pioneers of LED cinema lighting including Kevin Baxter of VIDEOLIGHTS.com.  Running the Kickstarter campaign is crowd sourcing veteran Ryan Avery who last year successfully financed the release of the Vedra line of Cinema Primes.

By offering pre-orders of early units at significant discounts, they are on course to surpass ten times their initial goal of $30K.  As of this writing they are currently in the high two hundred thousands.  A video on the Kickstarter page explains the technology and offer details: