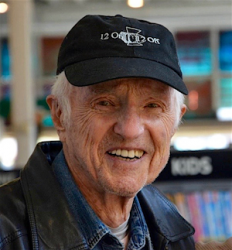 Renowned Cinematographer and Documentary Filmmaker, Haskell Wexler, ASC passed away this morning, December 27, 2015 at the age of 93.  He was born February 6 1922, in Chicago, Illinois, attended the University of California, Berkeley, and joined the merchant marine during WWII.  After the war he opened a film studio in Des Plaines, Illinois, and produced a number of industrial films and commercials.  However, he wanted to produce feature films and co-financed two, including Stakeout on Dope Street with Roger Corman under the pseudonym Mark Jeffrey.  Wexler was an active member of the International Photographers Guild since 1947,made his way to Hollywood in 1955, and became a Camera Assistant on the tv-series Ozzie and Harriet.

He subsequently worked his way up to Director of Photography and was inducted into the ASC in 1966 after winning his first Oscar for Who’s Afraid of Virginia Woolf?.  In 1969 he made the feature “Medium Cool,” which was a groundbreaking documentary-style narrative depiction of the riots outside the 1968 Democratic Convention.  He won his second Academy Award for Cinematography in 1976 for Bound for Glory.  Other notable films he shot include Coming Home, Second Hand Hearts, Lookin’ to Get Out, Colors, Other People’s Money, The Rolling Stones: Live at the Max, Matewan, Blaze, The Secret of Roan Inish, Canadian Bacon, Mulholland Falls and The Rich Man’s Wife..

Since 1998 he tirelessly led the effort to institute ‘Brent’s Rule’ (to place a cap of 14-hours on the production workday,) in memory of  Camera Assistant, Brent Hershman, who was killed when he fell asleep while driving after working a 20-hour day.  His documentary on the dangers of sleep deprivation, Who Needs Sleep? is available to view on Vimeo at: https://vimeo.com/63127085