According to technology journal TechCrunch, Google is planning to acquire Lytro, the imaging startup specializing in immersive Light-Field capture. The deal is expected to reach more than $40 million. Assets would presumably also include Lytro’s 59 patents related to light-field and other digital imaging technology.  Since Lytro previously raised just over $200 million in funding, an acquisition pricetag of $40 million is probably not the payday some original investors may have hoped for, but VR has not grown as fast as some had thought that it would, and apparently represents current market valuation. 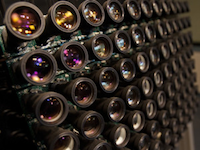 What Google intends to do with Lytro is open to speculation, but the technology could conceivable reach beyond photography to driverless automotive controls or smartphone operating systems.  For those not familiar with Light Field imaging, it takes a composite picture with data for the image provided from all directions so that perspectives and focus can be altered in post.  This ability is especially useful in creating immersive environments.

For a little more about Lytro technology see our NAB 2016 interview with former head of Light Field Video and Director of Product Development, Jon Karafin:  https://vimeo.com/163950468