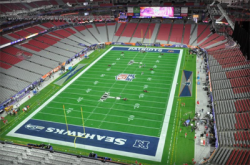 The University of Phoenix Stadium, home of the Arizona Cardinals and host venue for Super Bowl XLIX was recently  converted to LED lighting.  A total of 312 fixtures were needed to replace the 780 metal halide units that were originally installed in the stadium. The reduced number of fixtures and their lower power requirements resulted in a 75 percent energy savings, producing less heat, which can be an especially significant consideration in a desert climate.

• Better control via DMX to each fixture enabling instant, one-touch control to switch between different light settings and levels as well as the ability to create special lighting effects for unique fan experiences, such as the halftime show.

The University of Phoenix Stadium isn’t the first to be lit by LEDs; NRG Stadium (home of the Houston Texans) has also installed LED lights for this season, but LEDs have now played in the “Super Bowl of Lighting.”