By James Mathers, Cinematographer and Founder of the Digital Cinema Society 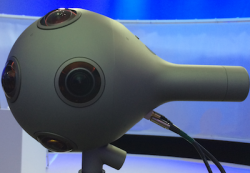 I was lucky to attend on behalf of DCS the November 30 introduction of Nokia’s OZO virtual reality camera system. The camera is about the size of an average human head and looks like a sperm with eight eyeballs.  They are actually eight 2K-by-2K-resolution cameras, spaced roughly the same distance as between your eyes, as well as eight microphones for multidimensional audio capture.  The unit weighs only 10 pounds, and can be operated in a compact self-contained package with 500GB of compressed RAW recording capacity, or output via SDI.

With each lens capable of a 195-degree field of view, the system produces a full 360-degree stereoscopic feed stretched and stitched in real time.  This realtime capability means it can be streamed live to view and monitor with standard VR headsets, which is a big advancement in VR production technology…WYSIWYG! 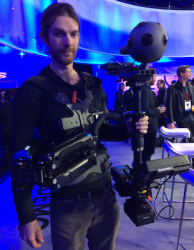 As you can imagine, it is challenging for the operator to be clear of the shot, however, they were demoing the system on a SteadiCam, as well as showing a live feed of a concert held across town on the roof of the Capitol Records building with a live feed available for viewing wirelessly on Oculus headsets several miles away at the LA Live venue.  They also showed a collection of finished samples of varying production value from early adopters such as NASA and even a narrative scene featuring Pirates on the beach.

The suggested MSRP is $60,000 with a $5,000 deposit for delivery expected in the first quarter of 2016.  Although the price is significant, placing it firmly in the professional market, I believe it is a good value considering the massive amounts of included new technology.  They are offering not just just a camera, but an end-to-end production and post system ready to be used to create professional Virtual Reality content.  It certainly beats kluging a bunch of disparate cameras together on a custom made rig and having to figure out how to sync, stretch, and stitch them together while maintaining good stereoscopic VR performance.

The only tradeoff I saw was that by the time the 2K sensors are stretched to wrap around and create a 360 view, the final perceived resolution is fairly low.  As sensor quality improves and bandwidth limitations ease, I’m sure the system will be greatly improved.

This division of Nokia is new, and OZO is their first product.  I would say they are off to a very good start by providing professional VR Filmmakers a tool they can use to meet the content demands of what is expected to be fast growing market.