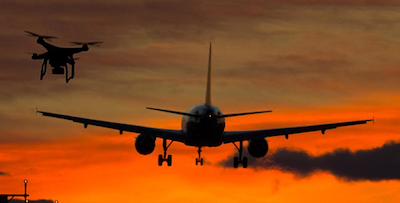 Although there have been a number of near misses reported in the last few years, news outlets are now reporting that a drone has hit an airplane landing at an airport in Quebec City, Canada.  No injuries were reported among the six passengers and two crew members on board the jet belonging to Quebec-based Skyjet Aviation.  However, according to authorities, an incident could have resulted in the downing of the aircraft.

Pilots are trained to deal with normal engine failure, and it is unlikely to be more than one engine that gets damaged, but there is always the prospect of multiple failures and even fire resulting from a drone being ingested.  There have been no official studies into what happens when ‘the solid elements’ of a drone are sucked into a jet engine, but the probability is that the engine would be destroyed and the failed engine components could remain inside the shroud or escape, in which case they could go on to do serious damage to other parts of the airframe such as the wings and fuselage, or cause damage to systems or injuries to occupants.

Drones are not allowed within 3.4 miles of Canadian airports, (5 miles in the U.S.). Operators who put aircraft at risk face steep fines and even jail time.  Yet the number of drone related incidents near airports has continued to climb.  Drone usage has soared in North America, Europe and China, raising privacy concerns and fears of collisions with commercial jets, and prompting the United Nations’ aviation agency to back the creation of a single global drone registry.