Running DCS is a labor of love, but occasionally it does come with some nice perks.  I was invited this week to enjoy a premium state of the art theatrical experience courtesy of  Dolby Laboratories and AMC Theaters.  The new collaboration known as Dolby Cinema at AMC Prime offers a premium movie-going experience which is currently available at only eight locations in the U.S., (including my local AMC in Burbank, CA). AMC hopes to expand and renovate 50 of their Premium Large Format, (PLF) screens to the new standard by the end of 2016.

AMC’s contribution includes plush extra wide, fully reclining leather seating with built in audio transducers, so that you not only hear, but also feel the sound.  There are are also 48 additional surround-sound speakers including giant overhead subwoofers.  The theater is almost completely matte-black with only the occasional glowing red lights as accent. 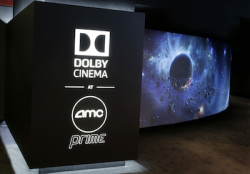 Even the entrance to the theater is designed as a an “audio-visual pathway” where the audience passes down a 40-foot long, curved screen playing movie-related content.  DCS Advisory Board member, Doug Darrow, a Dolby senior VP, explained that these will not be previews of coming attractions, but carefully chosen mood intensifying clips to prepare the theatergoers for the movie they are about to experience.

Although format agnostic in regard to film, digital, or various resolutions used for acquisition, a movie project must be post processed in order to be shown in Dolby Cinema.  Judging by the “Before and After” clips which were projected including the latest in Maze Runner series, The Scorch Trials, Disney’s Tomorrowland, and Pixar’s animated Inside Out it is definitely worth the extra effort.  The company has aspirations to also bring the technology to the home viewing experience with what they call Dobly Vision.

According to AMC’s John McDonald, the theatrical system is capable of 3D, but AMC has chosen to only feature 2D for Dolby Cinema at AMC Prime.  The rational seems to be that moviegoers can still see films in 3D at another 2,300 AMC RealD 3D enabled or 150 IMAX screens, giving them all the more choice in the premiums they select to view movies.

Current ticket prices for AMC Prime with Dolby Vision are $18.99 for adults and $15.99 for children, a buck more than 3D and $5 more than standard admission.  In full disclosure, the perk I received was two tickets to experience The Martian presented in Dolby Vision at AMC Prime.  It is a great movie that I can recommend in any viewing format, but probably much more enjoyable with the enhancements offered by this Dolby/AMC collaboration.