In a product launch held September 6th at their Studios in Culver City, Sony debuted their new Full Frame 24×36 camera first announced in June of 2017 at Cine Gear Expo. The camera is officially named VENICE, a high-end, 6K, Full Frame camera with a new Sony designed 24x36mm sensor that is said to have 15 stops of dynamic range. VENICE supports formats from Full Frame 3:2 to Super35 4K full 18mm height 4:3, Anamorphic and Spherical.

Director Joseph Kosinski, (Tron: Legacy and Oblivion) and Cinematographer Claudio Miranda, ASC, (Oscar winner for Life of Pi) were there to show and discuss their short film, The DIG, which used a prototype Venice camera. The film, which was shot with anamorphic lenses, (but not full frame which was not yet enabled), looked impressive and the filmmakers had positive feedback about working with the new camera. 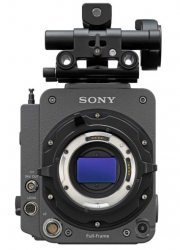 Control Panels on Both Sides 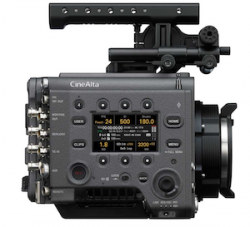 VENICE has menu displays on both sides of the camera. The main display is on the camera-right side for easy access by the camera assistant or DIT. The camera operator gets a smaller display on the “smart side”—camera left. This display shows helpful status reports as to frame rate fps, shutter angle, ISO, ND, and White Balance. The menus are intuitive, refreshingly logical and highly customizable. 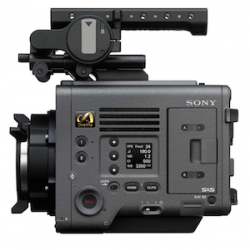 VENICE supports in-camera XAVC or ProRes recording onto SxS cards. Attach an AXS-R7 recorder with 4 screws and it lets you record visually lossless RAW or X-OCN onto AXS cards.
RAW
With the AXS-R7, you can record 16-bit linear RAW in 4K.
X-OCN
Also with an AXS-R7, record 6K (future upgrade)16-bit with significantly smaller files.
XAVC
XAVC is H.264/AVC intra-frame—for cost-efficient recording in 4K 10-bit and HD high-frame-rates.
Dual Recording
VENICE can record two streams simultaneously onto two separate media cards. For example: RAW or X-OCN on the AXS-R7 as a digital negative and XAVC or ProRes onto internal SxS cards for editing. VENICE will also, with a firmware update, record RAW or X-OCN on the AXS-R7 and XAVC 4K internally at the same time. When not using the AXS-R7, VENICE can record both XAVC 4K and ProRes simultaneously. If you’re using one SxS card, it would be ProRes 422 Proxy.

The DVF-EL200 electronic viewfinder has a 1920×1080 OLED display that is sharp enough to see whether the shot is in focus. You can attach and adjust the EVF quickly, without tools. Plug it in with a standard LEMO connector. A dial lets you adjust brightness (it is 2x brighter than DVF-EL100), contrast and peaking.

With 15 stops of latitude and a wide color gamut, VENICE follows familiar Sony workflows of the F65 and F55. VENICE can work in the same color space as the F65 and F55 and Rec. 2020.
Browse and View
Catalyst Browse and the RAW Viewer are free Sony software downloads for grading and transcoding allowing you to browse files, see and edit metadata, view video, apply color correction and establish looks. You can also use Catalyst Browse to transcode and copy files to connected hard drives, network storage or Sony’s Media Cloud. A RAW Viewer is an application that provides highest quality debayering of RAW files, enables QC of recorded files, does color grading and supports a number of control panels.

Sony has put a lot of thought into designing the body of the camera especially in terms of modularity.  In fact, they point out that the sensor can be easily swapped out by the user in the field with just four screws. This suggests to me that they envision a future camera system whereby a user may have different sensors for various applications. Rated at 500 IS0, this camera is not particularly light sensitive and it tops out at only 60fps. So, this may be their Venice sensor that offers lots of dynamic rage and a full frame for those who may want wide latitude or to limit their depth of field, and perhaps they are planning others with higher sensitivity or the ability to achieve high frame rates. Note that this is just conjecture on my part, but it could make sense to help create a more versatile system to help owners better amortize their investment, and I think that would be a worthy goal.

The lens mount is also designed for versatility with a native “e” mount that features “i” technology and a very shallow flange depth that is said to easily adapt to all the standard mounts such as PL, EF, and PV.  The Venice seems to have very solid build quality and features an entirely new cooling system.  At the suggestion of Claudio Miranda, ASC, they have also incorporated an eight step mechanical ND system, equivalent to ND .03 all the way to ND 2.4. The body features 12 and 24volt power in and out, so it can work with just about any existing accessories. All and all, this seems like a forward thinking camera that may provide another plateau in the constant advancement of Digital Cinema cameras.

Delivery is expected in February 2018, with an MSRP less EVF of $42,000US  (Although with a wink, Sony Manager Peter Crithary advised the audience to remember that it “was just a suggested list price”.  In other words, the price you pay may vary and will probably be lower).