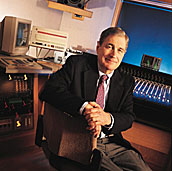 Ray Dolby, an American inventor and recording Technologist has died at his home in San Francisco at the age of 80. Dr. Dolby had been living with Alzheimer’s Disease in recent years, and was diagnosed in July of this year with acute leukemia.

Dolby founded Dolby Laboratories, (a longtime supporter of DCS), in 1965. His work in noise reduction and surround sound led to the development of many state-of-the art technologies in movies, audio equipment and recording studios, for which he received more than 50 U.S. patents. In the 48 years since Dr. Dolby founded Dolby Laboratories, the company has transformed the entertainment experience from the cinema to the living room to mobile entertainment. Tens of thousands of films and billions of products and devices with Dolby technologies have made their way to theaters, homes and consumers’ hands around the world. The industry has awarded Dolby Laboratories with 10 Academy Awards and 13 Emmy Awards for its groundbreaking achievements throughout the years.

The company continues to be a top innovator in the areas of Sound, Digital Cinema, Reference Monitors, and Auto-Stereoscopic 3D Displays.