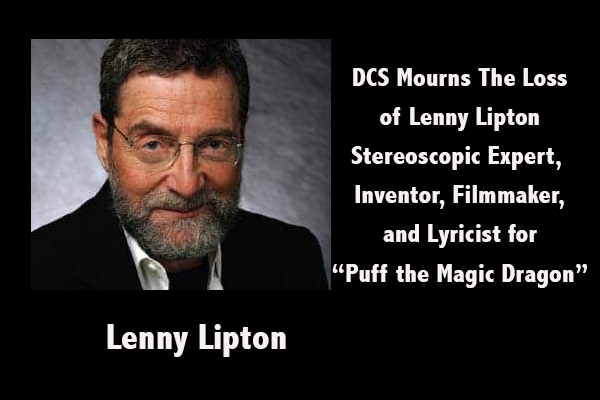 DCS is very sad to report that longtime member, Lenny Lipton, a well-known author, filmmaker and inventor, has died. In his long tech career, he was granted twenty-five patents in the area of stereoscopic display and wrote four books and many articles on cinema technology and stereoscopic topics. In addition to being a Lifetime Member of DCS, he was a Fellow of both SPIE and SMPTE, in addition to being a former chairman of the SMPTE working group that established standards for the projection of stereoscopic theatrical films. As a 19-year-old at Cornell University, where he majored in physics, Lipton wrote lyrics for the famous Peter, Paul and Mary song “Puff the Magic Dragon”.

In the 3D community, Lipton is known for developing the ZScreen electro-optical modulator, a tool used in digital 3D projection.  His company, StereoGraphics was acquired by RealD in 2005, after which Lipton continued development of his technology as RealD’s chief technology officer.  Among the many books Lipton authored are 1979’s Lipton on Filmmaking; 1982’s Foundations of the Stereoscopic Cinema; 1983’s Independent Filmmaking; and 2021’s The Cinema in Flux: The Evolution of Motion Picture Technology From the Magic Lantern to the Digital Era.