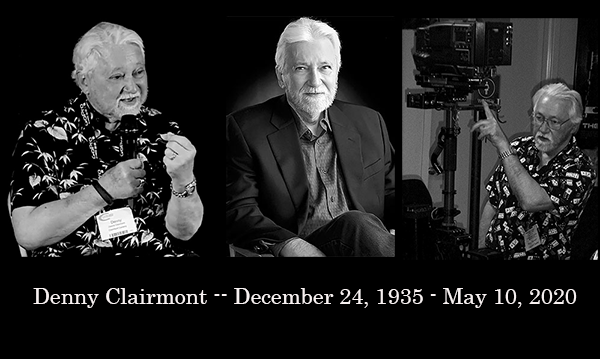 It is with great sadness that we announce that our friend, colleague, and founding member of the Digital Cinema Society, Denny Clairmont, passed away on May 10, 2020 at the age of 85.  He was a leading camera and lens expert and the owner of Clairmont Camera which he co-founded in 1976 with his late brother, Terry, and sold to Keslow Camera when he retired in 2018.

Denny was born on December 24, 1935 and grew up in Hollywood, the son of silent era cinematographer, Leonard Clairmont.  Denny and Terry were known for innovation and would often create custom gear to meet the special demands of cinematographers.  As a result, the firm became highly successful and, in addition to their headquarters in Studio City, CA, eventually had offices in Toronto, Vancouver, and Albuquerque, New Mexico.

They received a Medal of Commendation from the Academy of Motion Picture Arts and Sciences Scientific Technical Awards Committee and two Emmys for Lens innovations.  Besides being a camera and lens expert who was always willing to share his knowledge, Denny was also constantly eager to learn about new technology.  Before retiring to Northern California, he was a fixture at most DCS events in his trademark Hawaiian shirt and driving a later model Corvette.  He will be greatly missed by his many friends, colleagues, and proteges.

Here’s a short clip of Denny sharing his thoughts on Anamorphic lenses excerpted from the DCS Lens Panel at Cine Gear Expo 2014: