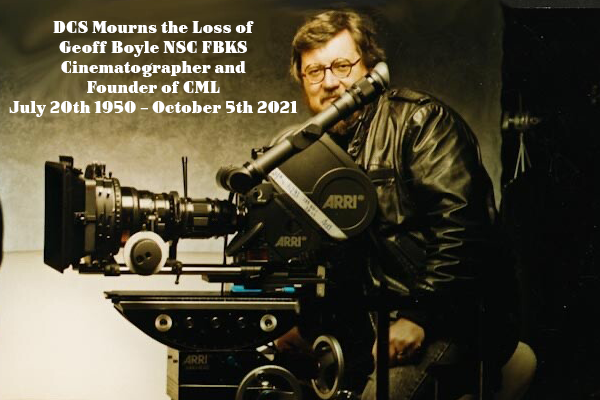 Although not unexpected, the sad news came today of the passing of Cinematographer and Founder of the Cinematography Mailing List, Geoff Boyle, NSC FBKS. Geoff was a good friend to myself and the Digital Cinema Society, always there to offer encouragement and lend a helping hand to our activities. He served as a Co-host on one of our early Cinema Lens events and our next one coming up later this month will be dedicated to his memory.

The short obit that follows was published this morning by CML, and the link will take you to our latest interview with Geoff from April of last year.  Also posted below is an announcement Geoff made last week of his planned euthanasia after a long, long battle with cancer.  He will certainly be missed, but his legacy will live on through his cinematography and especially through the cinematography communications platform he founded, CML.

Geoff Boyle was born in a council estate in the Northeast of England in 1950. At eight he was given his first Brownie 127 camera, which started him on lifelong image-making. He dropped out of his final year in art school to work as a stills assistant at the studio used as the location for “Blow Up”, working mostly in fashion and advertising. He also worked as a stills photographer covering music for notorious underground magazine Oz.
One day in 1973 he was asked if he knew anyone who could film a concert, and of course he did! He switched to film work entirely, shooting news, documentaries, and music promos for everyone from Bowie to Zeppelin. In 1985 he moved to commercials, and by the ’90s Kodak said he was one of 10 cinematographers shooting 80% of national spots in the UK. After 20 years in commercials he focused on long-form drama, from the digital production “Mutant Chronicles” in 2006, to multiple 3D projects, the series “Wallander” shot on REDs, and action film “Streetfighter: The Legend of Chun-Li” shooting 3-perf 35mm, among others. In the process he garnered awards from SMPTE, BKSTS, BSC, ACS, and NSC.
In 1996, while bored late one night in a hotel room during the middle of a shoot, he started the Cinematography Mailing List, which has grown to over 12,500 members worldwide. He has also taught workshops in the USA, UK, Europe, Australia, and Asia, and was appointed a Visiting Professor at the University of the West of England in 2013. He was always eager to exploit new technologies, but always in service to the image: “F*** the numbers!” was his rallying cry whenever people would obsess over resolution or bit rates instead of looking at the picture, along with “‘good enough’ is not good enough and ‘close enough’ is miles away from good.”
Geoff died Tuesday October 5th in Zoetermeer, NL after a long and feisty battle with cancer. He is survived by his wife, Deborah.And by the Cinematography Mailing List.
– – –
George Hupka, Franz Pagot, Roberto Schaefer, Mark Weingartner, Adam Wilt
CML management and technical services
Canada, Italy, and USA 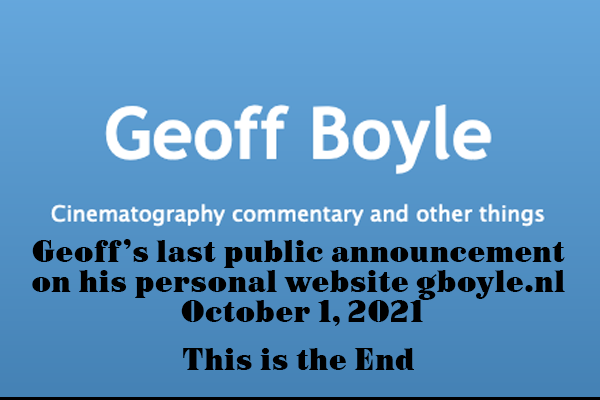 I have taken this as far as I can. Euthanasia is now arranged.

I’ve had a great life, travelled all over the world.

Most important of all is the 45 years spent with Debz. I could never have done it without her.

Now at the end she is a tower of strength and support.

i am so fortunate to live in a country that allows you to choose when the time is right for you.

It gets a little involved as they make sure it’s what you really want and that you’re not under any pressure.

Once they are convinced it’s fairly straightforward.

There’ll be an announcement on CML next week once it’s over.

See you on the other side.