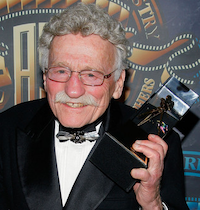 We are sad to report the passing of Digital Cinema Society Founding Member Isidore “Izzy” Mankofsky at the age of 89.  A renowned Cinematographer and member of the ASC, who over a many decades career, photographed such features as The Muppet Movie, Somewhere in Time and The Jazz Singer.  He also shot dozens of telefilms and was a three-time Emmy nominee.  A son of immigrants from Ukraine, Mankofsky was born in New York City on Sept. 22, 1931. After a stint in the U.S. Air Force as a still and motion photographer, and attending the Brooks Institute of Photography, he landed a job at a TV station in Reno, Nevada.  He later joined Encyclopedia Britannica Films and shot 161 half-hour educational films.

In 1975, Mankofsky began work at Universal Television, and he would go on to shoot such series as Columbo, Magnum, P.I. and The Wonderful World of Disney.  Miniseries in the ’70s and ’80s included Captains and Kings, Billionaire Boys Club and Love, Lies and Murder.  Mankofsky received the ASC’s Presidents Award in 2009 for his leadership and service to that organization and was a regular at many  DCS events, always eager to learn about the latest technology.  He is survived by his wife of almost 50 years, Christine, whom he married in 1972.