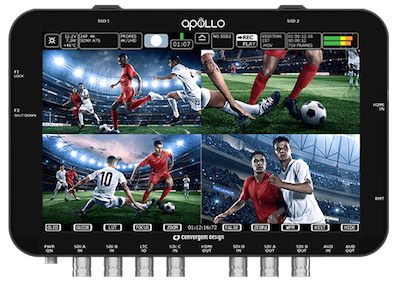 Convergent Design has announced Apollo, a portable HD multicamera recorder/switcher that can simultaneously record up to four HD video signals, along with a fifth channel of either a live-switch between the four or a quad-split reference view.  The ability to function as a four-channel live switcher while simultaneously recording the four isolated HD video signals keeps cameras in perfect sync with matching timecode, and a single SSD contains all of the multicamera media, dramatically reducing turnaround time for post.  There are two SSD slots on Apollo, allowing for twice the record time or mirror recording for safety backup.  Apollo utilizes industry-standard 2.5” SSD media, either manufactured by Convergent Design or qualified 3rd party models.

Additional functions are planned for release in the first quarter of 2016, including two-channel 4K/UHD video recording, DNxHD recording, and cascade interconnect between up to three Apollos for up to twelve HD channel or six 4K/UHD channel simultaneous recording.  These and other additional functions will be made available via a free firmware update.  A remote keypad control unit will be offered along with a rack mount and other accessories.

Apollo is scheduled for release in December 2015 with an MSRP of $3995, including an SSD to USB3 adapter, a 5-pack of SSD mounting handles, and a universal AC power supply included.  Owners of the Convergent Design Odyssey7Q and Odyssey7Q+ will be able to purchase an Apollo Option for their devices as an upgrade for $1795.

For additional information about Apollo, please visit the Apollo microsite at Convergent-design.com/apollo