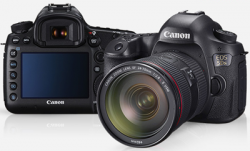 If more megapixels are your thing, Canon has announced the release of the 50.6-megapixel EOS 5DS and EOS 5DS. The sole difference between these two DSLRs being the low-pass filter effect cancellation of the 5DS R that allows every bit of resolution from the sensor with the potential downside for moiré and other color artifacts. Both cameras utilize Dual DIGIC 6 Image Processors in order to quickly process the large amounts of data created by the sensor and to enable a variety of enhanced features. At 50.6-megapixel off the CMOS sensor, the 5DS and 5DS R have become the highest-resolution full-frame DSLR cameras on the market.

The recommended ISOs range is 100-6400, which can be expanded to 50 or 12800 via the Dual DIGIC 6 Image Processors. While many shoots may not require the highest resolutions, the added versatility of the extra pixels cannot be understated. The 5DS series features 1.3x (30MP) and 1.6x (20MP) crop modes that allow photographers to effectively “zoom” into the scene while still producing high-resolution imagery. The selected crop will also show up in the optical viewfinder for more reliable composition of your images. M-RAW and S-RAW settings are supported for shooting images at 28MP and 12.4MP, respectively.

Other features added to this model include a built-in intervalometer and EOS Scene Detection System with a 150,000-pixel RGB+IR Metering Sensor, as well as a 61-point High Density Reticular AF system, which includes 41-cross-type points. This system is extremely advanced, with Intelligent Tracking and Recognition (EOS iTR) which scans the scene and determines which autofocus points to use as a subject moves around the frame. Also, anti-flicker technology recognizes flickering light sources and compensates for reliable exposure and color during periods of shooting. And, this camera can maintain a continuous shooting rate of 5 fps, which is fast, considering the size of the 50.6-megapixel files.