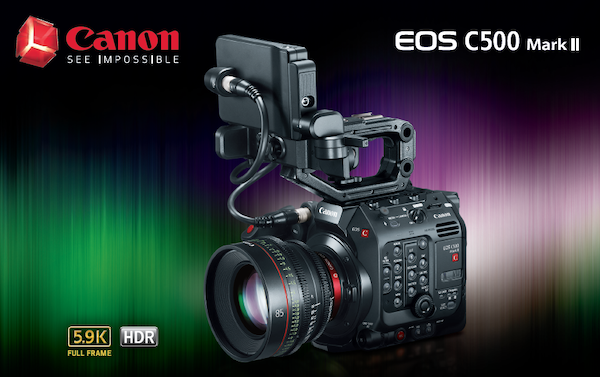 In addition to the changeable mounts, the new camera’s body is quite modular. Included are 13 accessories, such as a 4.3-inch LCD monitor and the GR-V1 grip, and users can choose from a wide range of additional accessories to meet various needs. Optional accessories include the EVF-V70 electronic viewfinder, SU-15 shoulder support unit and EU-V1 and EU-V2 expansion units. The EU-V1 expansion unit allows for gen-lock, sync out, remote use and ethernet connection, while the EU-V2 expansion unit features those functions plus a V-mount battery connection, two analog XLR audio ports and 24v DC Out.

Additional features of the Canon EOS C500 Mark II include: 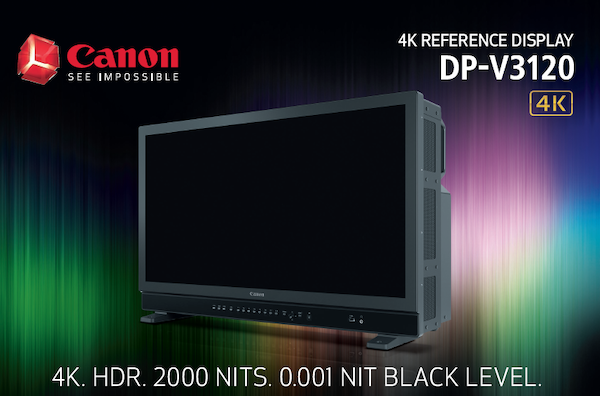 Canon has also announced the launch of the DP-V3120, a new 31-inch professional 4K reference display featuring edge-to-edge luminance of up to 2,000 cd/m and a black level of 0.001 cd/2. This combination creates a contrast ratio of an astounding 2000000:1, making it ideal for high-end HDR and 4K production workflows.  The DP-V3120 is said to exceed the Dolby Vision™ required monitor specifications including General Monitor Specifications and Grey Scale Reproduction to meet the requirement of Dolby Vision™ certified post-production facilities.

The display also features 12G-SDI terminals (four IN and four OUT) to enable simultaneous comparing of HDR and SDR content in dual view mode, multiple video inputs in quad view mode, or up to an 8K input signal. Other functions include the HDR Toolkit, featuring HDR capable vectorscope, waveform monitor and histogram. False color analysis, pixel level value checking and split screen HDR versus SDR comparison are also possible. In addition, the DP-V3120’s LAN interface allows the display to be controlled remotely over a network using a web browser.  The DP-V3120 is currently scheduled to be available in November for an estimated retail price of $39,000US.